Most of us can't even imagine ourselves completing a half marathon, so the likes of triathletes and ultra marathoners are basically...legends! Breaking both physical and mental barriers to get to the finish line, their grit and discipline inspire us.

Don't we all want to seize the day and make the absolute most out of it?

So, we had to speak to Singapore's top female IRONMAN Triathlete Choo Ling Er, whose full time job IS preparing for triathlons. This means double training sessions almost daily, coupled with frequent sports massages and chiropractor visits to aid in recovery. A regular “work week” usually consists of approximately 30 hours of working - with bike / run sessions in the morning followed by swim / gym workouts in the evening.

Her husband Alan, co-founder of Autobus, is also Ling's manager; taking care of everything outside of her training including sponsorships, collaborations and other admin matters. 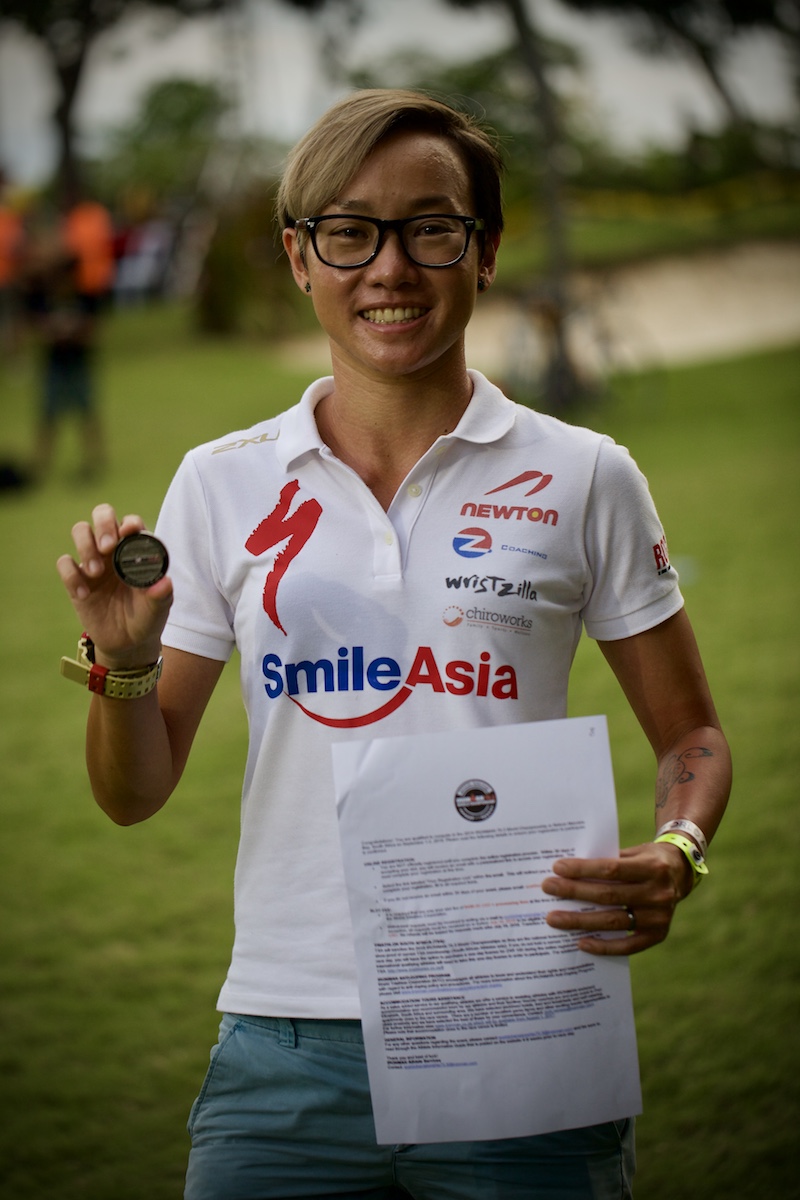 Has fitness always played a big role in your life? When did it move from a hobby to a job?

Ling Er ("L"): Yes, I’ve always been active. So, I started playing badminton and then moved to running when I was studying in a Polytechnic in Singaproe. When I got injured, I started swimming and eventually got hooked on long distance stuff (triathlons).

I think the shift to when it became more competitive / professional in nature was after my serious injury two years ago - I was training and got run over by a car. This resulted in a broken left femur, as well as broken ligaments in my right ankle and kneecap. I also had a blood clot in my skull, which made balancing very difficult and also caused frequent blackouts. In other words, my sporting lifestyle basically came to a halt.

During that year, I not only realized how much I missed triathlons but also saw my own drive in being willing to take a year to recover and do all the horrible rehab work. Given all that, I knew that what I was doing was not just a passion… but an obsession. It is something that is just a part of my being.

How would you describe yourself? In your opinion, what traits of yours have supported you in breaking limiting barriers time and time again?

L: I would definitely say I am a calm person. In between triathlons, it is "normal" for competitors to “stir shit” with one another to rouse each other up - personally, I don’t take part in any of that and try to remain level headed and calm when prepping for a competition - I like to “show off’ when I’m actually competing by doing well during the triathlon itself (that is what matters anyway!!)

Lastly, I definitely am very persevering - I like to tell myself to “train hard, play later”. In other words, I train very hard leading up to competitions so that I don’t have to struggle (i.e play) during the actual race itself. 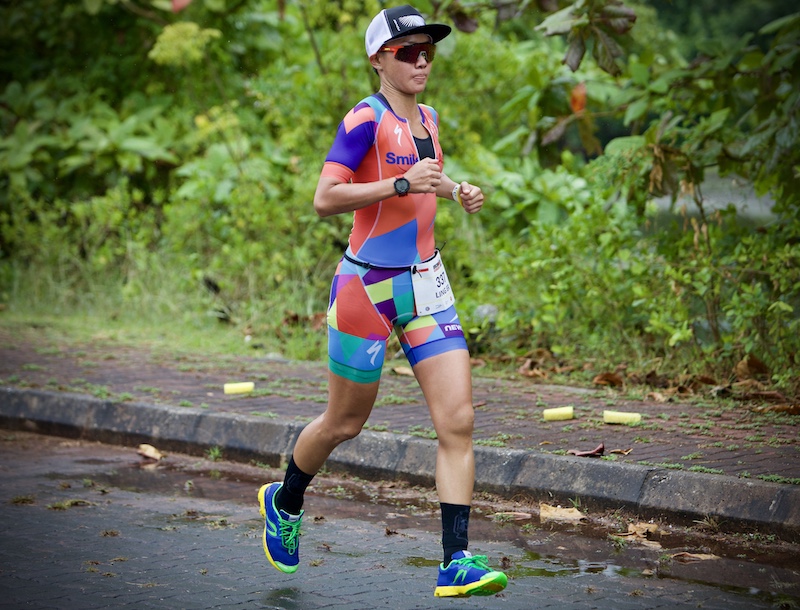 Have you faced any gender related challenges or self limiting beliefs and how have you dealt with them?

L: Yes, definitely. As a female, I am naturally not as equipped as males when it comes to “fresh” timings (i.e when starting fresh off a run or fresh off a swim). They are naturally faster. However, I try to focus on my strengths and build on them. For example, I am quicker at transitions and better able to handle hot climates than most of the males, which definitely gives me an added advantage during the actual triathlons themselves.

What are some factors that have enabled you to be resilient in the face of stress during training or competitions?

I tell myself, during tough races, to remember things like my injury and how far I’ve come - how I've almost lost it all (and sports). I also tell myself to remember the daily grinds at 4am… and that I didn’t do all of that and go through that to lose or waste my time and money. That makes me push beyond what I think I can.

Obviously, it can get very very lonely during training. While I have some friends that cycle with me for the first five hours, the final two hours (probably the two that separates me from the rest) I usually do alone. Once again, I find motivation from my previous injury. I also keep thinking about goals that I have set and how I want to be a better version of myself. 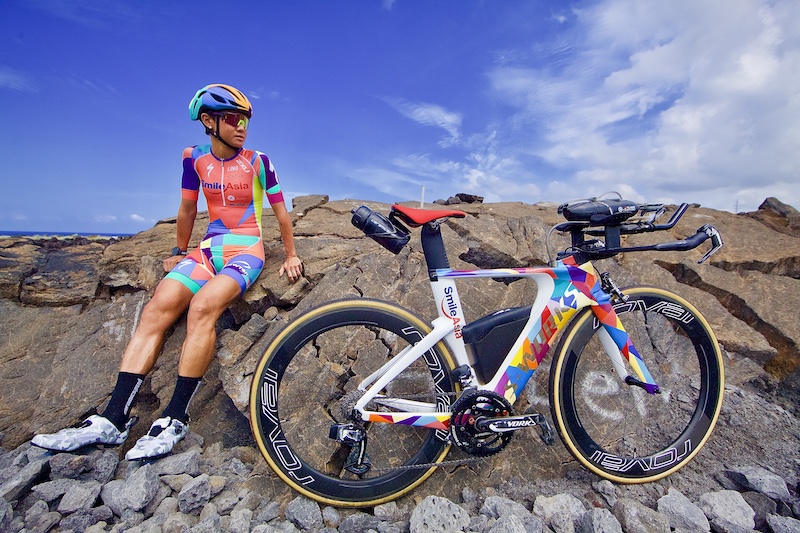 How does Alan support you?

L: Alan is definitely someone who pushes me out of my comfort zone. I generally do not like being in the limelight - but Alan reminds me that as a performance athlete, that is necessary at times. Also, I like to stick to conventional old fashioned methods of training. Alan has to continually remind me that as times change and new programs are developed, it is important to keep up with the times.

He is also a huge support system for me - when I was in Kona, Hawaii for the World Championships, I was very apprehensive and scared because it was the first time I was training in a new place by myself. I had no idea of the geography of the place in terms of training routes and what would happen if things like a flat tire happened while training. He encouraged me to go and talked me through my fears - who knows what would’ve happened without that level of support?

What are your support systems?

Alan, my family, and my friends - I am so blessed and constantly receive texts from loved ones reminding me to keep going,

Although this was initially tough, I have learned to distance myself from negative influences in my life. Thankfully, I have Alan to help me “read” people - he usually picks up good/bad vibes easily. While it can come across as cold, I’ve seen how important it is to surround myself with positive influences and how detrimental it can be to have people who don’t ultimately care for you as friends.

What are some morning/night rituals that help you get on with the rest of the day?

I also like to take all my clothes out and prepare everything I need for the next day - this helps in the morning when I just need to get up and go. 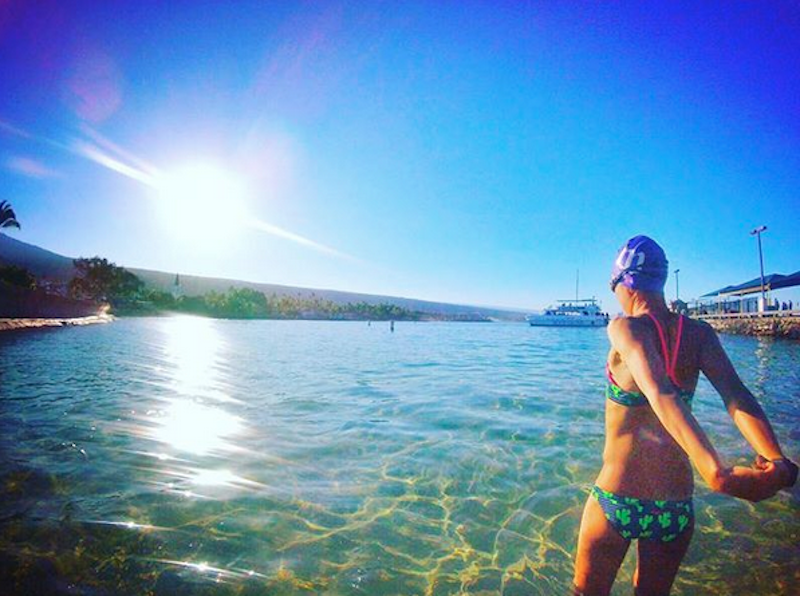 As an athlete, what are some productivity tips that keep you on top of your game?

I do a lot of visualization in my head during the preparation phrase, leading up to races. I break down my equipment preparation phrase by working backwards from what I need for the various legs of the triathlon; run, bike, and swim. From there, I factor in potential bad race scenarios and what additional gears / kits / tools I would need to minimize that.

I also visualize how I think the triathlon will pen out for me, as well as my competitor in the race. This means thinking about their strengths compared to mine, and how I can use mine against them to make sure I have the “trump” card.

What are some ways you build mental strength & toughness? Are you keen to hear more tips on how you can do so? Drop us a note, we'd love to hear from you! Email: [email protected].